I was shooting the breeze with Coach Ryan after classes this weekend and we were doing a little reminiscing about our individual training and our time teaching at the dojo. I hope as I continue to write, I’ll build up to how the dojo was started, and some of the early days of the school. I think coming up on our 10 year anniversary this March has me reflecting more and more.

Today I wanted to tell you about earning my blue belt. In Jiu-Jitsu, blue belt is the intermediate rank between being a beginner (white belt) and advanced (purple belt) in the adult program. The average time spent at each belt is around 2 years- for some a little shorter, for others it takes longer.

For me it was 26 months as a white belt- but hey it’s not like I was counting the days or anything haha. It was a small class on a Thursday night in October. Right before we began, our coach King Webb surprised me with the promotion. The other students in class told me congrats and then we got into training. I remember feeling like I had just hit this major milestone! I felt like I had put so much of myself into my training and it was amazing to be recognized by my instructor as no longer a beginner. I thought this was the biggest thing I’d accomplished in my life- and even though I had graduated from university earlier that year- it was true.

Like I mentioned in my last post, I had been a slacker basically all of my life. That definitely carried over into my education and caused me to tailor the college experience to be pretty easy- I took some great classes like film, communication, and journalism classes. They were interesting and enjoyable subjects- and I made great grades- but I wasn’t exactly pushing my limit or pulling any all nighters like my friends over in the chemistry department. Just kinda coasting.

There was no way to coast or slack off in Jiu-Jitsu and get results. That was a big part of the attraction to me. There was obviously theory to understand, but there was also a physical component where the rubber met the road and we put the theory into practice.  I had an experience early on in my training that illustrated just how effective this martial art was and I felt I had to know it to be able to defend myself or someone else. On top of that, I was FAR from a natural. Jiu-Jitsu was really hard for me- and that quickly became the main reason why I was there. I wanted the challenge. I wanted to prove to myself that I could come up against difficulty and not fold.

Another thing I think about with my blue belt promotion is that, although my coaches and training partners wanted to see me stick with it and keep going, there was no outside influence or motivation to keep at it. If I would’ve told my friends and family I wanted to quit, they’d have been like, “Oh yeah, you have a lot of other stuff going on. Makes sense. Want to go get something to eat?” We wouldn’t have had an intervention and it wouldn’t have viewed as some major life decision. Although choosing to stick with jiu-jitsu has been one of the best life decisions I could’ve ever made.

They couldn’t have known the impact training was going to have on me, so I can’t blame them. And in fact, that’s part of what made my blue belt promotion that much sweeter. This was my way of working to grow and improve myself. Nobody was forcing me to do it. It wasn’t a requirement for anything. Nobody outside the jiu-jitsu school really knew what to make of it all. I liked that. It was my thing.

In those early days leading up to blue belt, it became apparent to me that everything effects everything else. Since I was in jiu-jitsu and I was going to be a black belt in 8 years (missed that goal date), I couldn’t go out for the late nights because I had training in the morning. I started to get into some better lifestyle habits. The amount of money I saved not going out on Saturday nights more than paid for my tuition to train. I ate like I wanted to get the best out of myself. I started to read more and had a bigger appetite to continue my education like I was doing in jiu-jitsu. The good habits and disciplines of training started to spill over into other areas of my life and made a great impact.

So, you know… I don’t think I’d be overstating it to say that the path to blue belt was a life changing experience for me. Maybe you’ve already had something in your life that made you rise to the occasion and helped you to get the best out of yourself. In that case, your story and the impact training will have on you is going to be different than the impact it’s had on me. One thing I’ll guarantee you though, is that once you make your blue belt you’re going to feel a sense of satisfaction and you’ll 100% feel that you invested your time and energy wisely.

We look forward to helping you along the way at the dojo. 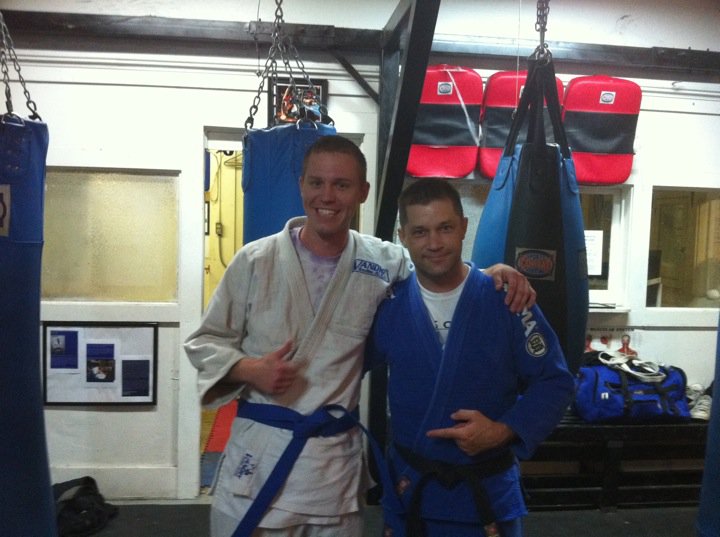 Please leave us a Review and Testimonial and tell us how well you enjoy our programs. Our goal is to serve our students with the highest quality training and facilities in Kyle & Buda, TX. Thank you for giving us the opportunity to serve you and your family.

Thank you for visiting our student page and community resource area.

We have this Customer Service box here to help you and your family. Do you have a question, suggestion or concern we can address? Please click the link below to complete the form. Name, email, phone # and a note with regard to how we can help you is all we need. Our team will reach back out to you within 3 business days.

Do You HAVE A Friend, family member, neighbor or one of your children class mates that could benefit form our karate kids or martial arts programs for adults?

Please send them our information or talk with one of our Instructors today.

Please Leave Us A Review